There is something sick about the frenzied nature of the hysterical media around another purported sighting of the thylacine, it reveals a malaise in our society. The past can be reconstructed and the future is fine because we’ll have an alternative planet, plan B, on Mars.  There is also something sick in the romantic denial of reality of the explorers in their expeditions, usually by the very privileged or wealthy (such as Dick Smith), into far off forests to “rediscover” the thylacine. Another trend, that says more about the malaise of our current moment, is the fetishization of the notion of de-extinction.

Just as the hysteria over Warewolves in Europe was being put to bed – assured by the collapse of wolf numbers – a fresh ecological disaster was brewing on the other side of the world. We see “an animal of the panther tribe which commits dreadful havoc among the flocks” used as a smokescreen, it’s threat to a wool industry overstated. A bounty of £1 placed on the Thylacine’s head. The land became empty of the cry of the Thylacine. The Tasmanian

The irony is that people paid for its destruction now they pay for its return. The debate about cloning the Tasmanian tiger is currently dormant but will no doubt resurface.

To “bring back” the Tasmanian tiger will actually recreate the tiger, the specimen recreated will be a human conception because the species that lived existed in context ie. an ecosystem, that can’t be recreated. However, there may be good ecological arguments for the re-emergence of an apex predator – it’s reemergence can’t be used to justify more mass extension under the pretext  of “we can bring it back so fuck it”.

The creation could inform a commodified conceptual view of nature – a Disney view of animals – of individual animals not processes – where the animal can be made into a commodity. The economic interests will no doubt dictate the inevitable not to mention the spectre of a national icon. Is there a choice?

No doubt there would be scientific merit in the doing so (studying animal behaviour, physiology etc) but there is a darker side: the symbolic function. It deflects form the real issues: species extinction continuing at an unprecedented rate because of human activities. The Tassie devil for example is teetering on the brink of extinction due to the scattering of devil populations into pockets of populations. This has been caused by large scale clearing of its native habitats and now is being ravaged by a new disease. The population of devils is so small that there is debate whether or not it is already moribund. Are we observing an already extinct species?

Phrases like “bring back” makes horrible facts palatable. It’s a comfort for a society with a guilty conscience, aware in an abstract sense of our own environmental destruction in need of atonement. The Leadbetter’s Possum, Victorians Animal Emblem is teetering on the edge of survival because of logging. Just one species amidst a country that has the highest extinction rate of mammals in the world. The collective guilt is from our complicity in countless species ravaged by a system that seems to have an unstoppable logic – jobs and growth, jobs and growth jobs and growth. What kind of jobs? What kind of growth? The disconnect of the “economy” from nature is like a boat broken free from its moorings floating out to sea, meanwhile we hear “don’t worry, technological innovation will save the day” and “scarcity creates innovation”, tell that to the thylacine or our great grand children who face the worst effects of climate change.

Do we see our collective and individual mortality in the face of the tiger? The problem is actually one of memory after the land was empty of witnesses – the aboriginal people being targeted for genocide round up and left to rot on an Island far away from their country – the after the shock then the environmental changes around us were incremental, slowly large tracts of forests have been completely evaporated, farmland slowly spreads, new roads form, a lake dammed another lake dammed, eventually we cannot see what we are doing to the environment but we can remember a fact like Tasmanian tiger, the memory is like a decaying tooth one which we can fix our attention on, bringing it back then becomes a shrill sense of urgency. An urgency tied with romantic notions of nature: “…maybe just maybe there is hope to bring these animals back alive walking amongst the forests once more or swimming in the seas of the world.”
Apart from an ecological role the neo-tiger will be living proof of the humanities capacity for horror, the tiger will pace and yawn but it will be little more than a celebrated celluloid reproduction. Its face should also be like a mirror, so we can stop and reflect asking the question: “why?” 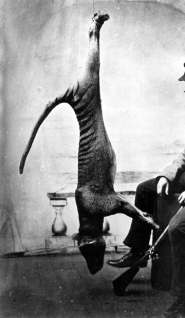 “I don’t think [the project] would have begun that much longer before 1999 when Jurassic Park came through.”

“What we found out was the people who want to put money into this project have no interest in conventional conservation.”

For a good account on issues we face see the Millennium Ecosystem Assessment by the UN:

Intersections of the environment, politics and society